A private jet is a tool of immense worth, appreciated by those who value their time. It represents elegance and success. In today’s world, it is becoming an instrument of great utility for every individual who’s looking to use their time productively. However, this indispensable machines started out like any other innovation- as the dream of a determined person.

On 7th October, 1963, the first Lear Jet took off on its maiden flight and made history. It was a remarkable piece of machinery, and nothing else in the aviation market for civilians came even close to the Lear Jet. It was smaller, cheaper, and much more convenient than every other aircraft in the market. It set the bar for every plane that came after it.

William (Bill) Powell Lear, the man behind the iconic jet, was 61 on that day. He had built himself a fortune over his lifetime through his innovations in consumer electronics, and he invested it all on his biggest project- the Lear Jet. He was low on funds, and feared that the entire program would have to be shut down. A few months after its first flight, the prototype came down and erupted in flames. In a fateful turn of events, this proved to be the best thing that happened to Bill. The plane was destroyed due to carelessness of the pilots, who were provided by the Federal Aviation Administration.  This meant that he was eligible for the insurance amount, a hefty sum of $500,000.

Bill shaped the design to make it the simple yet high performing machine that it was. The idea was to make the plane simple enough to be flown by civilian pilots after a reasonable amount of training. Hollywood was fascinated with the machine, and soon it became a part of popular culture. Frank Sinatra owned one, and his aircraft has its own fascinating history. 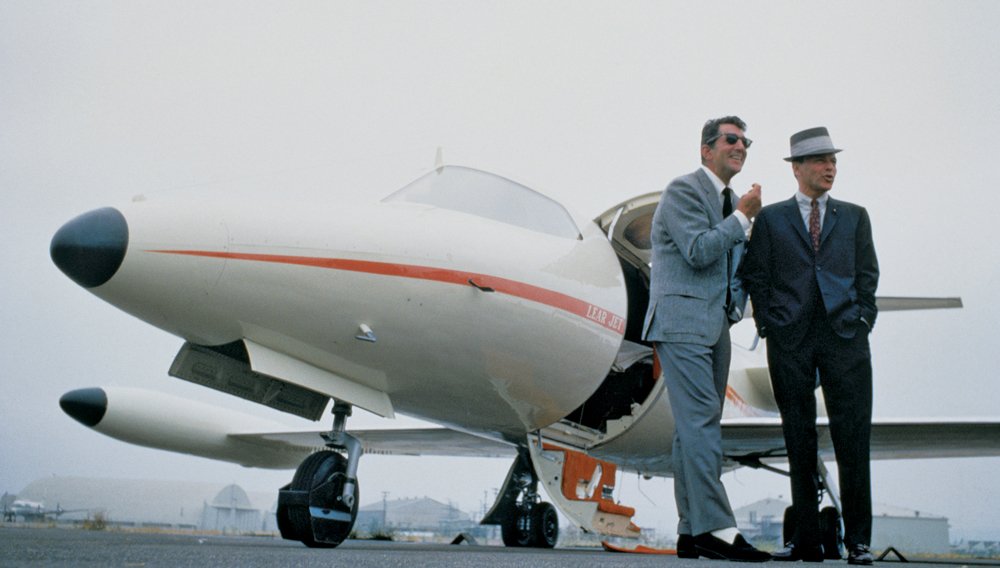 Frank Sinatra with his Lear Jet, named Christina II after his youngest daughter.

The Lear Jet marked the beginning of mass produced private aviation. That same year, Mystere 20 by Dassault Falcon also took its first flight. It was featured in Audrey Hepburn’s 1966 film, “How to steal a million”. This made it the first widely seen aircraft around the world. 1966 marked the beginning of Gulfstream, which introduced private jets with large cabins. It could transport up to 19 passengers and flew up to 4,000 miles without needing to refuel.  After this, players like Boeing, Embraer, and Cessna entered the market. Innovative aircrafts have been taking the world by storm since then.

The world of private aviation has come a long way since the 1960s. The practice of ferry flying started out as a lucrative industry, in which daring pilots were given the job of transporting private charters across oceans to its owners. These pilots were considered elite as they travelled alone, covering distances that those small planes weren’t meant to fly.

Today, the ferry flight industry is not the risky business it used to be. It is an opportunity to provide a service to elite passengers at lower prices. It is creating a market which does not restrict luxury only to the ultra-rich. BookMyCharters has a range of ferry flights that you can book easily at any time. Follow this link to enter the magnificent world of private aviation!