In the media, business persons, tycoons, and other high-net-worth individuals usually have the spotlight focused on their jet-setting ways around the globe using premium air charter services. However, VIP transportation is in high demand among all individuals who mandatorily require the exclusivity, efficiency, and luxurious comfort of air charter services. And it’s no different for world leaders and politicians.

It’s no secret that different state aircraft around the world differ in levels of luxury, cost, and age of the aircraft. While the luxuriousness of air charter services isn’t the highest priority for some world leaders; nevertheless, all heads of state experience customized air charter service transit accompanied by, of course, high levels of protection.

Donald Trump, President of the United States of America

The President of the United States always travels by Air Force One, the name of any United States Air Force aircraft that transports the current President at the time. Donald Trump’s air charter service transportation is composed of 3 aircraft:

While USA’s Air Force One might be considered to be an aviation marvel, the Russian government owns the largest number of planes and helicopters, designed in the Soviet era. The Ilyushin Il-96-300PU serves as the presidential private plane. Due to security reasons, the presidential air squad comprises of 4 aircraft rather than one. When the President travels, all 4 aircraft fly together but the specific plane used by Vladimir Putin isn’t known until take-off.

While the IL-96-300PU has a basic exterior design, it’s the lavish and opulent interiors of the private plane that are sure to grab attention. Tapestries, gold accent, and paintings decorate the interiors of the aircraft – along with a spacious office, a bedroom and a fully-equipped gym. Everything has been planned in such a way to keep the President’s comfort in mind.

Britain’s Prime Minister, Theresa May, completes official government trips in a militarized version of the Airbus A330. Compared to the private planes of other leaders of nuclear powers, the official aircraft of Britain is a modified passenger plane with changes made in cabin planning and additions such as 58 seats, missile defence systems, and hardened communications. 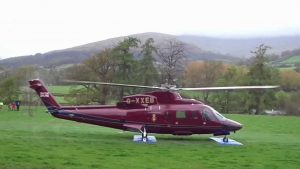 Until recently, the Queen and the Royal family would travel by Boeing 747s or Boeing 777s but are now transported for official events by private planes and helicopters of the Royal Air Force. The royal squadron contains:

The Prime Minister of India, Narendra Modi, travels by an Air India issued Boeing 747-400. While not considered to be the most state-of-the-art aircraft there is, the 747-400 is a symbol of yesteryear luxury. The Prime Minister currently uses this private plane for long-distance international trips and a modified Indian Air Force Boeing 737-800 BBJ for short-distance international and domestic trips.

Tamim bin Hamad Al Thani, Emir of Qatar owns the flashiest fleet of luxury private jets in the world. As one of the wealthiest people on the planet, the Emir has a truly spectacular air fleet at his disposal.

During official trips, a minimum of 10 aircraft transport the Emir’s family, members of the Qatari delegation, and service staff – coming to approximately 1,000 people. The carried cargo on the flight has even been known to transport the Emir’s limousine! Occasionally, the Emir uses a business luxury private jet Bombardier Global Express BD-700-1A10 for his personal use.

It’s interesting how VIP air charter services are enjoyed differently by different world leaders. As can be seen, by this compilation of leaders, some VIPs prioritize the luxury and comfort afforded by private travel while others focus on the practicality and efficiency of a private plane. Ultimately, the main responsibility that has to be fulfilled by government air charter services is the swift, safe, and fortified transportation of the dignitaries.